With the 6L80/6T70/6F50, the solenoid regulator valve does as its name implies; it limits the pressure to the solenoids in the transmission to about 130 psi. By doing this, the solenoids don’t have to be massive to handle full line pressure and the engineers have an easier job matching solenoid output pressure and volume to various solenoid amperages. Since the TCM and solenoids are expecting pressure feeding the solenoids to be between about 60 PSI (min line) and 130 PSI (limit pressure), the TCM is calibrated to expect a specific solenoid pressure when operating at a specific duty cycle. Imagine how tough it would be for the TCM to predict solenoid output pressure if the solenoids were fed the full range of line pressure of 60 to 200+psi, especially considering that most transmissions do not have any pressure sensor reporting the solenoid input pressure. This is not to say that it’s never done. As an example, the 10L series transmission uses full line pressure to feed the pressure control solenoid, torque converter clutch solenoid, and some shift solenoids, but it relies on linear, or electromechanical solenoids, to control the clutch pressures. 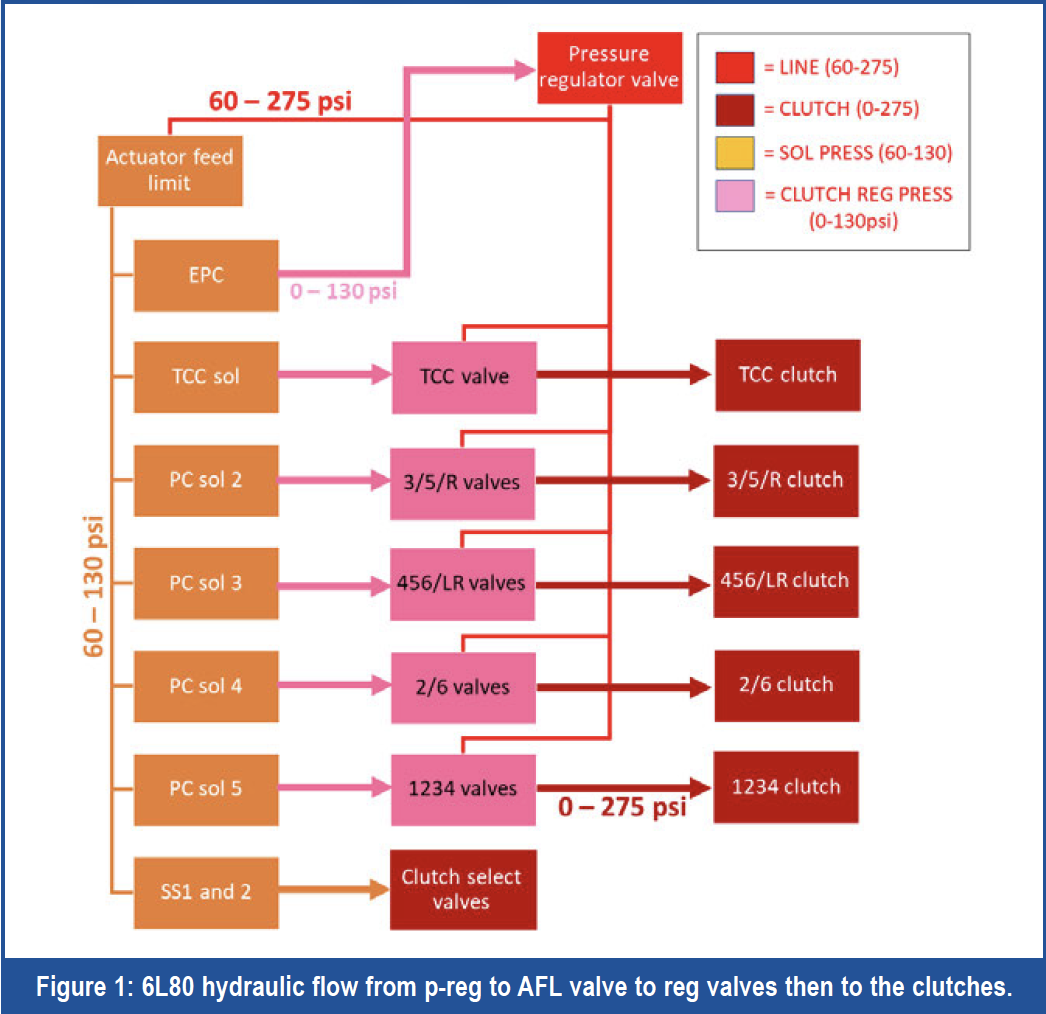 With the 6L/6T/6F series transmissions, the TCM modulates the solenoids to control individual pressure regulator valves for line pressure, driving and holding clutches, and the torque converter clutch. As seen in figure one, a failure in the solenoid regulator oil circuit will trickle downstream and affect overall line pressure, TCC, and clutch application. Too low of solenoid regulator pressure will result in low line pressure and low clutch pressure, which can cause slipping clutches and shift flares. Too high of solenoid regulated pressure will result in high line pressure and high clutch pressure, which can cause harsh engagements and shifts, binds, and broken components. Many transmissions use the same configuration as this 6L/6T/6F example, but there are variations and the way the hydraulic circuit is constructed plays a hand in what can happen when all is not well.

The solenoid regulator valve is typically a simple regulator valve that utilizes a spring on one side of the valve that forces the valve in a position to allow full line pressure into the solenoid feed oil circuit as can be seen in figure two. On the opposite end of the valve, the newly created solenoid pressure pushes on the “reaction” portion of the valve and works against the spring pressure. When solenoid pressure builds high enough, the valve moves against spring force and eventually “cuts-off” the line pressure feeding into the solenoid circuit as shown in figure three. Not all manufacturers regulate the same pressure to their solenoids. Depending on the transmission, the pressure necessary to move the valve to the cut-off point could range from around 50psi (ZF 9HP) to 130 psi (6L/6T/6F).

Lastly, in case you were curious, that little balance orifice feeding the reaction side of the valve is used to dampen the pressure changes so the valve won’t overreact when solenoid pressure increases or decreases. Imagine the valve example in figure three with too large of an orifice, when pressure builds up, the pressure would push on the reaction area too quickly and cause the valve to overextend to the left. Then it would drop pressure rapidly and the spring force would overextend the valve to the right. This process would repeat and cause pressure oscillations and possible noise and rapid bore wear. If the orifice were too small, valve action would be delayed because pressure must first squeeze through that orifice before working on the reaction end of the valve. The engineers design this balance orifice to allow for smooth action of the solenoid pressure regulator valve. As a reference, I measured a few spacer plates that I had on-hand and the balance orifice sizes ranged from .033” on a 4L80 and 6F50, to about .040” on a 4L60 and ZF 9hp, and to a whopping .070” on the 5R55s.

The TCM expects the solenoid pressure to be within designed limits, and as mentioned, the TCM does not typically use a pressure sensor to monitor solenoid feed. So before you think about modifying the solenoid pressure by changing spring tension, realize that you could possibly push the TCM outside of its adaptive capability. Think back to figure one — if the TCM is expecting a maximum of 130psi feeding the solenoids (and it has no way of verifying that), it will operate the solenoids as if they are being fed 130psi. But if the solenoids were actually being fed 150 psi, as the TCM modulated the solenoids, more pressure than expected would push through the solenoids. In the case of our example 6L/6T/6F transmission, that problem would result in more pressure working on the clutch regulator valves and the clutches would receive high pressure at a faster rate during a shift. This will likely result in shift harshness and the TCM would work hard to adapt it out.

A calibrated vacuum test station will pull 5” of vacuum through a 0.040” orifice and pull 25” of vacuum with a perfect seal (sea-level measurements). The vacuum test puts a value to the extent of the wear found in the valve body bore (figure seven). Wiggle tests, picking, and visual inspections are good, but they are also subject to interpretation. A vacuum test will provide repeatable results.

What’s a good vacuum test result? Well, that’s a topic for debate, because it all depends on the valve size, whether it is sealing one valve land or two, hydraulic circuit design, and what the oil circuit is feeding. The answers will vary greatly depending on who you ask. When discussing vacuum testing with Bob Warnke from Sonnax, he mentioned that it’s common to find low vacuum readings on worn valve body bores, but also measuring a very high vacuum reading, like 24” or 25” Hg, isn’t always a good thing. Valves do need clearance for oil and too high of vacuum could indicate a valve that’s too tight and might stick, but generally, the smaller the valve, the higher the vacuum results will be. He stated it’s not uncommon to pull 24” Hg on some small valves found on certain Toyota units. He also stated that solenoid regulator pressure is super critical on certain transmissions, such as the Toyota U660, 09G, TF81 to name a few. Solenoid regulator pressures that are off by as little as 3psi will start to exhibit changes in shift qualities.

Whether you’re new to vacuum testing or not, consider starting a log of vacuum test results from each overhaul, and with it, jot down a note describing the transmission’s symptoms and failures. If you need a place to start, opening the instructions for any particular valve at www.sonnax.com will provide the tech with a suggested vacuum test specification. The suggested specs aren’t found on the vacuum test guides, but they are included with the information found with the individual valves.

For another approach to handling solenoid regulator valve oil circuit issues, I spoke with Dean Mason from Superior Transmission Products, and he shared his philosophy and research on hydraulic designs, issues, and remedies relating to the solenoid regulator valve and transmission hydraulics in general. Dean mentioned that there are over twenty factors he considers when designing a valve and when reviewing Superior’s product catalog, you’ll see many of these valves carry the NO~STICK™ title. He describes one factor as “corrected bore clearance,” where he ensures that his valve design incorporates a “boundary layer” of fluid between the valve and bore. The boundary layer allows for valve lubrication and reduces bore wear. While measuring the diameter of a 5R55s stock valve and comparing it to Superior’s replacement valve, you will see that it’s about .0003” smaller to allow for this boundary layer of fluid as can be seen on figures eight and nine.

Another feature of the NO~STICK™ valves are the annular grooves across the length of the valve’s land, which reduces bore contact. He states these grooves also reduce valve drag and provide an area to collect lube oil and capture contaminates. As an example, while researching the cause for lockup and shifting issues, and erratic engagements on the 5R55n/ s/w, he discovered the necessity for stabilizing pressure regulation and reducing valve cycling distance and speed.

If the solenoid regulator valve and/or bore needs addressing, there are a few aftermarket options available.

In conclusion, don’t forget to closely evaluate the solenoid regulator circuit? It’s just too important and just about everything in the transmission is relying on it! With most popular transmissions, there are variety of options when dealing with worn valve bores ranging from drop in valves to reaming solutions. If there’s no option, then it’s time to source out a new or reman valve body.

The Solenoid Regulator Valve – Too Important To Overlook!

Four Qualities of an Excellent Manager

ZF’s Porsche DoppelKupplung PDK Transmission – Back to the Future…