In this issue, we’re going to look at a 2007 GMC K2500 equipped with a 6L90E that had no line rise after being rebuilt. But first we’re going to take a brief look at what makes the 6L80/90E transmission tick.

The General Motors 6L80E and 6L90E 6-speed transmissions were introduced in the late 2005 General Motors truck line as a successor to the 4L60E and 4L80E. It features clutch-to-clutch shifting.

The hydraulic system primarily consists of a vane-type pump, two control valve bodies, a converter housing, and a case.

The transmission is controlled by its internal transmission control module (TCM). The TCM commands shift solenoids and variable bleed solenoids (located on the valve body) to control shift timing and feel. The TCM also controls apply and release of the torque converter clutch, which provides maximum fuel efficiency without sacrificing performance. 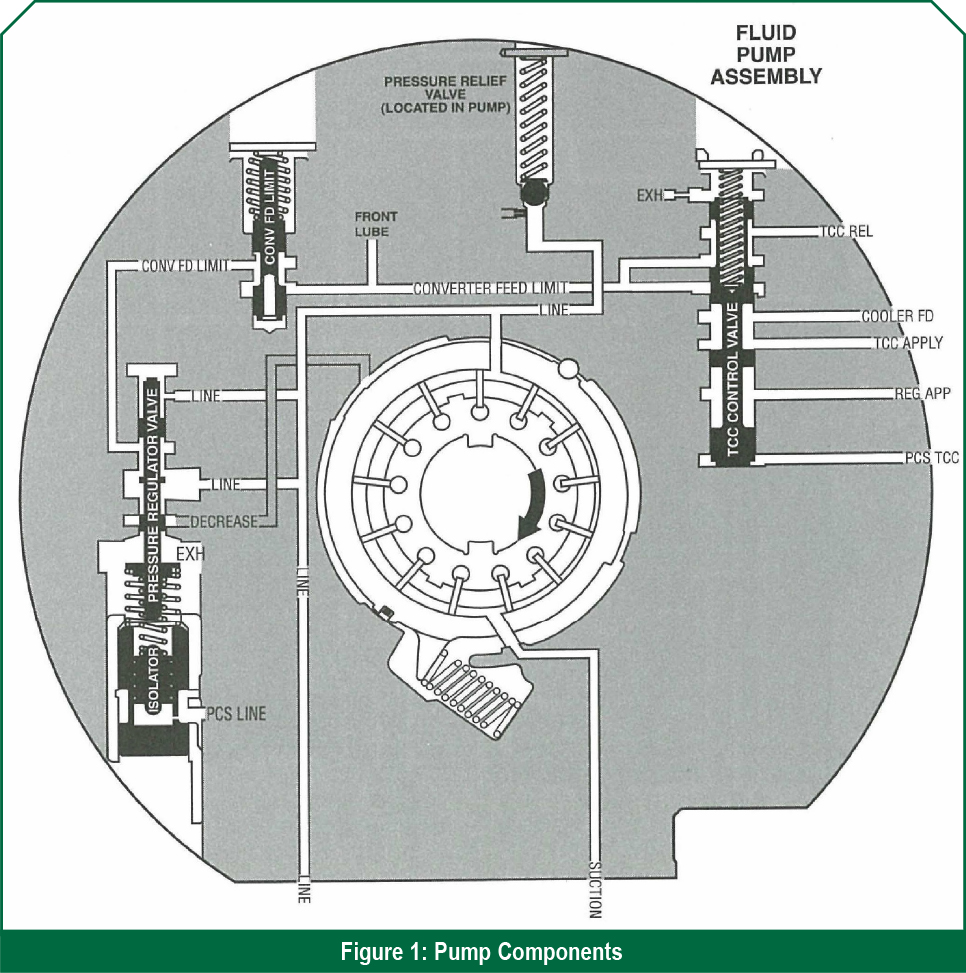 which provides system pressure; two control valve bodies, which control application and release of the individual clutches; the torque converter housing, which houses the pump assembly; and the case assembly.

Transmission Control — The 6L80/90E transmission is controlled by its internal TCM.
The TCM receives signals from throughout the vehicle. From those signals, the TCM controls the operation of the shift solenoids and variable bleed solenoids to provide the best possible shift timing and feel.

Problems in other onboard computer systems can interfere with transmission operation. Remember to correct all existing codes in other modules before attempting to diagnose a transmission problem.

Pressure Controls — The 6l80/90E transmission hydraulic system uses a vane type pump to supply line and boost pressure to operate the transmission. The pump assembly consists of the pump cover, the rotor and vanes, a slide, and the torque converter housing.

The pump cover houses the rotor and vanes, the pump slide, the pressure regulator and isolator valves, the TCC control valve, and the converter feed limit valve (figure 1). The pump cover also includes a pressure relief valve and spring to prevent over-pressurizing the hydraulic system.

Now that we’ve looked at how the 6L80/90E transmission operates, it’s time to tackle our problem vehicle that had no line rise after a rebuild. The technician working on the vehicle said he rebuilt the transmission about a month ago; it came back within a couple of weeks with the fluid burnt.

He connected a pressure gauge: line pressure was steady at about 65-70 PSI but there was no line rise during acceleration. The technician disconnected the transmission electrical connector to try to force maximum line rise; it wouldn’t rise above 70 PSI, indicating an internal problem.

During disassembly, the technician found the 1234, 35R, and 456 clutch packs were burnt. He went over his parts list from the previous rebuild and found that the torque converter housing had been replaced due to debris damage, and the 1234 clutch piston and 35R clutch drum assembly were also replaced.

Since the clutch circuits were capable of holding pressure, the technician knew that this problem was something he’d built into the unit.

The technician knew that the only major component he’d replaced was the torque converter housing. He disassembled the pump for inspection. He checked the isolator valve, pressure regulator valve (located in the pump cover), and their bores for wear. The pump cover looked okay.

I had the technician take pictures of the original and the new OEM torque converter housings’ hydraulic passages and send them to ATRA for review. From the pictures it was obvious there was something different about the new housing.

With pictures in hand, I contacted our local GM dealership parts department to discuss the situation. According to our local parts guy, the torque converter housing and pump body assembly had just been updated to a new design and weren’t interchangeable individually (news of this update is just getting out). Replacing the torque converter housing would require replacing the pump body assembly with the new design.

I contacted the technician and explained that the torque converter housing and pump body were updated and would have to be replaced as a set. The technician replaced the pump body assembly with the new, updated version and reassembled the transmission.

He installed the transmission and checked the line and boost pressures. Both were now within specification; the line pressure was rising and falling with throttle position. With the line pressure responding properly, it was time for a test drive.

During the test drive, transmission worked great. The technician left the pressure gauge connected to the transmission so he could monitor line pressure and rise.
They worked perfectly. With the line rise problem resolved, it was time to deliver the vehicle.

Well, there you have it: a brief look at one of the many problems associated with replacing component parts. That’s why it’s so important to compare the replacement parts with the originals, to make sure they’re the same as the part you’re replacing.

If they aren’t identical, question it: Make sure you’re using the correct replacement parts. With a little better understanding of parts interchange, you should have no problem keeping those trannys rolling!

J2534 Programming: What You Need To Do It Yourself

Do I Need to reProgram THE COMPUTER

More In Keep Those Trannys Rolling

I Have a Tool for That

66RFE, Are Your Plugs in Place?

Conquering the Ghosts of an AS68RC

Raptor with a Rumble