This month’s profile is about Dave Riccio, the owner of Tri-City Transmission in Tempe, Arizona. Rodger Bland wrote a Shop Profile about Dave and Tri-City in the January/February 2011 issue. At that time, it was apparent that Dave was a proponent of change, embracing change as an essential aspect of improving the business.

However, as you read on, you’ll see that Dave learned that being an agent of change isn’t enough. Dave now admits, “It also requires ‘followable’ leadership qualities that I had not yet acquired.” He continued, “No matter how much you want to change things or how obvious the benefits of those changes appear to be, you can’t force or impose them on the team. They need to know about, contribute to, and buy into the plan. Without their buy-in, they’ll resist, and as I found out, you might lose the team altogether.”

When I asked what had changed since the last article, Dave said the most significant changes were with him. He said, “The physical changes in the shop are the bright shiny objects – the things that can be seen, admired, and are energizing for us. They’re the obvious things that most shops and, we too, love to talk about and show off to our peers, competitors, and customers. But internal, psychic, personal changes are invisible. They’re like the wind. We often say things like ‘Look at the wind,’ but you can’t see the wind. It’s invisible. However, you can see and feel how the wind affects things. These invisible changes address things that affect team culture and attitudes.” He continued, “These types of changes impact us at work and in doing life outside the shop. These are the changes that matter most and have made the greatest impact on us at Tri-City, making us better people. When we’re better people, it flows to benefit Tri-City and our customers as well.”

Perhaps the following story will help illustrate Dave’s point about physical and invisible changes. Last February, ATRA Board Member Ron Lingenfelter and his wife, Bette, came to Phoenix for their annual visit to escape the harsh Nebraska winter. My wife, Sue, and I host them while they’re in the area, and we often tour Arizona’s sites with them. One day, as we passed through the Tempe area, Ron suggested that we stop by Tri-City Transmission to say hi to Dave and see what’s new and exciting.

Ron and Dave became acquainted when they attended a ProfitBoost Software training retreat a little over 10 years ago. They’re both creative guys and, over the years, have shared ideas for improving their respective businesses. So, Ron was interested to see what Dave had been up to, and he wasn’t disappointed. Dave had implemented several new changes since Ron’s last shop visit.

While Ron got to see the shop’s physical changes, there wasn’t enough time for Dave to share the invisible personal transformations he and his employees were experiencing. However, as we were driving away, Ron said, “Wow! Dave’s made some nice changes in the shop. It looks like he’s doing well and that COVID-19 hasn’t gotten in the way. He also seems more grounded and centered than in the past – still excited but not quite as wound up. The whole atmosphere of the shop seemed calm but busy.” Unwittingly, Ron had noticed some of the effects of the invisible changes.

Ironically, a few weeks later, I was asked to write this article. My subsequent interview with Dave allowed me to learn about Dave’s and his team’s invisible changes.

Before I get into the invisible, allow me to highlight some of the physical “bright shiny objects” with you. The pictures within this article tell the story better than any words I could write. Still, in no particular order, here we go.

I’m sure I’ve overlooked several other things, so check out the additional pictures in the online version of GEARS. Now let’s examine the invisible changes.

Two questions I always ask in shop owner interviews are, “What makes you different from your competition?” and “Why should a customer choose you over your competitors?”

Dave answered both questions simultaneously, “We love to be different. If everybody’s doing it, we’ll generally do it differently. Just because everyone’s doing it doesn’t make it the best. We make extra efforts to be different – stand out rather than blending in.

“For example, we don’t tout honesty. Everyone else does, so that’s not different. The one thing competitors can’t duplicate is ‘our culture.’ We focus on building a noticeably better culture.

“We’re not for everyone, but we want everyone to sense that there’s something different about us. The Laws of Attraction bring us the right customers and employees. We want people to choose us because the vibe and the messaging of our business fit them. We value a win/win, treating our customers and employees with dignity and respect. We expect the same from them. If they don’t treat us that way, they’re not right for our business.”

“How do you cull out the customers you don’t want?” I asked. Dave acknowledged that over the years, it’s become intuitive. He explained, “Bad experiences led me to the decision to ‘fire’ certain customers. In the beginning, I developed a profiling process that began with rating how they acted on the phone and during the check-in process. Were they pushy, angry, or abusive? Did they push back against our procedures? Did they listen to what we said and asked? Were they straight with us or evasive? We assigned values to the traits they exhibited. If they reached a certain threshold, we politely suggested that they find another shop.”

I asked Dave how they can afford to send business away, and he replied without hesitation, “We can’t afford not to. When we started doing it, our lives got better. Coincidentally, so did our sales, profits, and productivity. It makes sense that things go better when there’s mutual respect.”

Then I asked, “So Dave, tell me about this ‘invisible stuff’ and what drove you to change the company culture?” He gave me permission to share his personally life-changing story.

As I mentioned in the beginning, Dave wasn’t equipped with leadership qualities, relying solely on grit and determination. Without going into all the details, suffice to say that except for Cindy Hillquist, the Tri-City team is comprised of all new employees since the 2011 Shop Profile. Dave’s lesson, he was the common thread – he was the problem.

Dave’s self-improvement journey began when he hired a semi-retired, former shop owner, Randy Marsh. Dave recalled that the shop manager position was vacant, and he was “up to his neck in alligators.” The urgency of the situation and Randy’s experience drove Dave to offer Marsh the job after a couple of phone calls and one face-to-face interview.

Two days into the job, Randy announced that he was quitting. When Dave asked why he’d quit after only two days, knowing the pickle Dave was in, Randy said, “It’s because you’re an a**hole.” Dave recalled being shocked, but there was something about Randy’s calm, matter-of-fact response that caused him to pause and ask, “Would you be willing to stay and help me learn how to not be an a**hole?”

The short version of the story is that Randy stayed, and the two men became close friends. Until the day Randy passed away nearly ten years later, he helped Dave learn about himself. Dave discovered things he’d never have learned without Randy’s authentic, honest confrontation and close friendship. Dave added, “Randy helped me see things I never knew about myself – they’re called blind spots. Blind spots are things that you don’t know you don’t know. It’s a funny way of saying it, but you can’t do anything about them because you don’t know they exist. I discovered that I was blind to the fact that I was an arrogant, condescending, manipulative a**hole. But I also learned that I could choose to change it.”

Over the next several years, Dave attended workshops and devoured books to become more self-aware, authentic, balanced, and honest – bottom line, more “real.” Dave puts it this way, “I’m learning to understand my blind spots, my human condition, and how to go with the flow of life, yet exert my will when needed. Most of all, I’m embracing change and leading in a new way.”

Dave says it’s a journey, and the Tri-City team is taking it with him. “It’s led to a culture based on nurturing and serving the needs of others and one another – servant leadership, putting others first.”

Dave sums it up, “Like the wind, these invisible qualities provide visible effects. They positively impact our ability to consistently provide our customers with outstanding car care experiences.

“Primarily, by being authentic with each other, trust runs high within our team. When trust is high, communication is easy, enabling us to experience changes in a different way. This makes us nimbler as we quickly adapt and embrace change.” 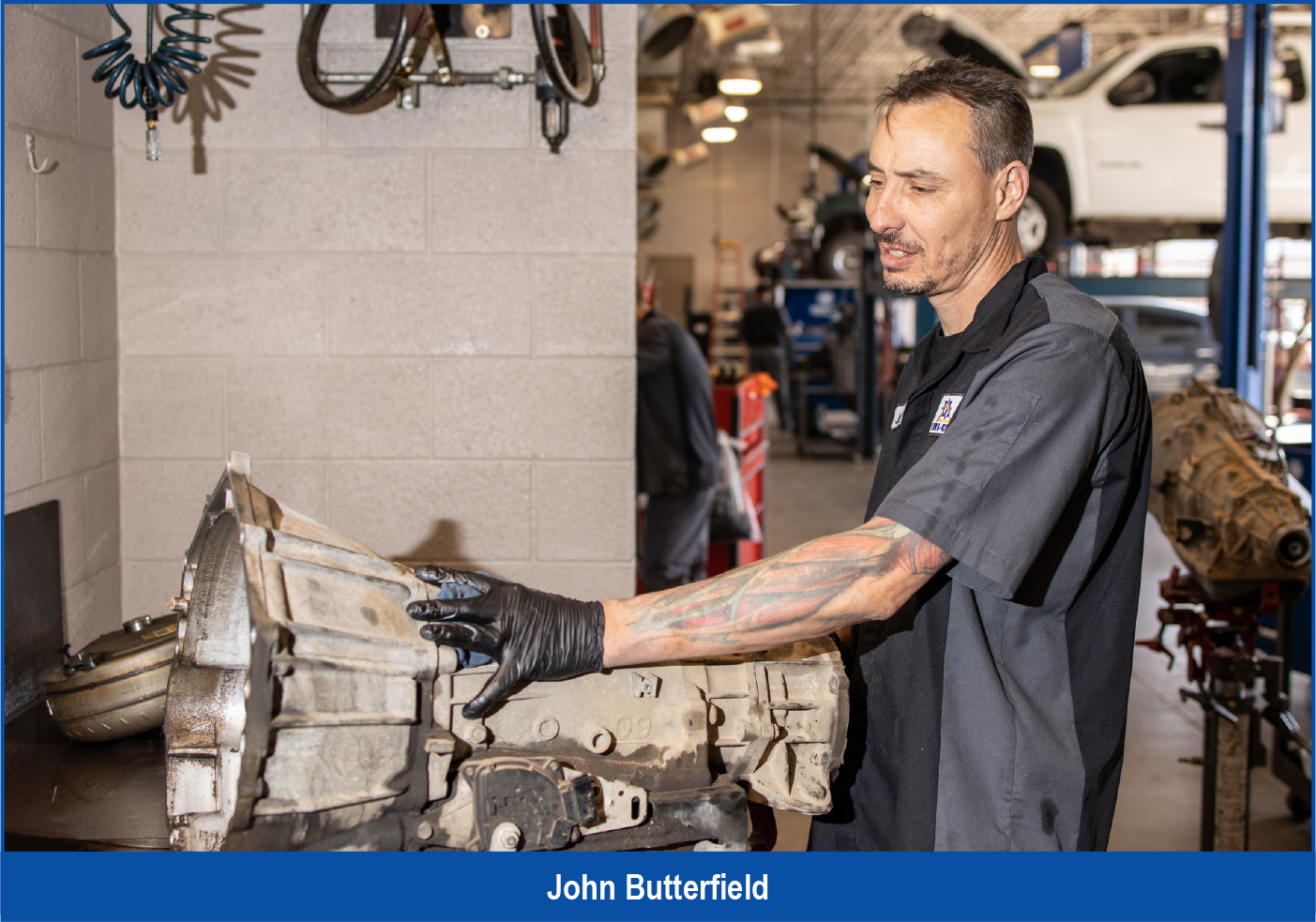 If you’d like to learn more about how Dave applies the power of Invisible Changes to his life and how it’s woven into the fabric of the Tri-City Transmission culture, listen to Dave’s presentation from last year’s virtual Powertrain Expo. He shares his heart and explains how things like self-respect, authenticity, vulnerability, honesty, and mindfulness transformed Dave and the Tri-City team.

You can still watch Dave and all the other presenters on the ATRA website. Contact Vanessa Velasquez to request information on how to log in. Her email is vvelasquez@atra.com. You can also find links to presentations Dave’s posted on his personal website, davericcio.com/videos.

Zach’s Transmission and 4×4 From Technician to Tactician