A 2013 Ford Taurus all-wheel drive, 3.7L police interceptor with a 6F55N came into the shop with a 3-4 flare shift complaint, burnt fluid, and no codes.

Unfortunately, this car came with an extra twist: It was in a recent accident and had just been repaired. The radiator, along with other, major front-end components were replaced or repaired. So all hands were on deck to watch for anything else that could cause issues outside the transmission.

The diagnosis came back that there was internal transmission damage and no codes. We removed the transmission for inspection, and found the 4-5-6 clutches were burnt, with no other significant damage. No major hard parts were worn or replaced.

We cleaned the unit thoroughly and rebuilt it with new, molded pistons and a full kit. We flushed the radiator cooler and installed the transmission. Once the unit was full and adapts reset, we took it on a test drive.

On the initial shift sequence, the 2-3 and the 4-5 shifts were noticeably firm. But the input speed sensor signal was falling to zero in 3rd and 5th gears. The computer system set DTC P0717 — no signal from the turbine/input shaft speed sensor A circuit.

Since the sensor was original, we immediately suspected it was the culprit. We ordered a new, factory-replacement sensor and installed it in the car. Now input speed behaved normally with the engine running in park and neutral. It dropped to zero when we shifted into drive or reverse, as expected.

We drove the car again only to have the same results. Every time the vehicle reached 3rd or 5th gear, the input speed sensor signal would drop to zero, and a P0717 code set. We also noticed a harsh reverse engagement.

With this information in hand, we ordered another speed sensor from the dealer and installed it. Why? Because you never know if you’re the victim of a bad part (‘new’ stands for never ever worked)!

With the new sensor installed the results were the same as before. Now we became suspicions about the integrity of the wiring harness and the computer. We performed a pinpoint test for the circuit (figure 1). After observing the signal remaining constant even while wiggling the vehicle harness and connectors, we verified the circuit as good.

What else could be the problem? With the sensor circuit testing good, it was time to think outside the box, or rather, inside the unit. We pulled the unit and inspected the electronics for shorts and opens. Again, no issues. The fluid was clean and there was no burnt odor.

Next, on to the geartrain and clutches. A quick disassembly revealed no issues until we got to the 3-5-reverse/4-5-6 drum assembly. The snap ring that held the cast iron retainer to the 3-5-reverse drum had blown off (figures 2-3). The cast retainer is the reluctor wheel for the input speed sensor and our focus in this matter. Could this have been our problem?

As soon as the clutch applied, in the absence of the retainer snap ring, the oil pressure in the circuit caused the retainer to move away from the 3-5-reverse drum assembly and press against the end cover. The retainer rotation stopped, due to pressure and contact with the end cover, causing us to lose the input speed signal.

Once the clutch released, the retainer was able to rotate with the 3-5 reverse drum again, which allowed the input speed signal to return.

This situation also caused the 3-5-reverse clutch adapt value to be inaccurate, which allowed the 3-5-reverse piston to apply with minimal accumulation. This is where the harsh engagement into 3rd, 5th, and reverse came from.

When the retainer snap ring popped out (figure 6), the 3-5-reverse drum suffered the first line damage. Later — only a crystal ball could tell exactly when — the cast retainer locator tab couldn’t survive its newly-found, free environment and broke from the opposing forces of being driven by the 3-5-reverse drum and being stopped by the pressure forcing it into the end cover during the 2-3 and 4-5 shifts under vehicle load. 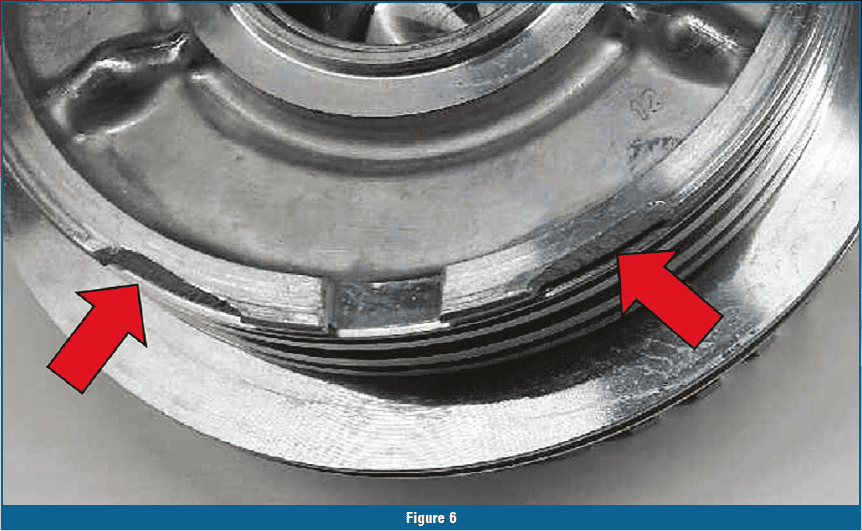 The engagement into reverse had less impact because it was drawing the 3-5-reverse drum assembly to a stop. The drum and retainer are stationary in reverse until the brakes release and the vehicle begins to move.

All of which begged the question, how could we keep this from happening again? There are a few points to consider to prevent this from occurring.

First, examine the snap ring for distortion. If it’s stretched, replace it. Never try to use your metal-working skills to close the gap. Also, inspect the 3-5-reverse drum snap ring groove, especially if the unit was built before. Check the drum for contact wear from the cast retainer tab to the aluminum. If these areas are compromised, replace the drum.

Next, make sure the snap ring seats fully into the groove during assembly. You may be in a hurry, but this is definitely worth a thorough second look.

Finally, after installing the unit, never shift into reverse until the unit is warm (about 150ºF or 65ºC) and full. Always recheck and correct the fluid level after you’ve tested all engagements and gears, including lockup.

Also, make sure the transmission isn’t in failsafe when you shift it into reverse. This can cause undue stress on this snap ring and could cause it to blow out.

Sometimes what appears to be a dirty magic trick might end up being something not so obvious but yet fundamental. Don’t be so distracted by the illusion of what’s wrong that you can’t go back to the basics to look at all possibilities.

Keep in mind that you can figure out any disappearing acts once you take a closer look at all pieces of the performance.

Special thanks to Paul Morgan from Bryan Oliver Brothers Transmission shop in Bryan, TX for providing the pictures and information.

More In Delivering the Goods

The D7GF1 and D7UF1 – A Closer Look at Hyundai/Kia DCTs

The Toyota AC60E: Simpler Can Be Better!

Six-Speed Success! 62TE Things To Do To Deliver Them Right The First Time