One of the most important issues facing the U.S. is its graying population. We’re getting older every day, and nowhere is this more evident than with today’s transmission shop owners. When we first began the What’s Working program, the average age of the shop owners polled was 52… and that was about six years ago.

This is why so many shop owners are taking a greater interest in their exit strategy. It’s a big deal because, as a shop owner, you can’t simply drop your tools and walk away: You have years of reputation-building and investment to consider, not to mention the employees who’ve come to depend on your shop for their livelihood. Dave Duste, founder of Dusty’s Transmissions in Central Point, Oregon, is one shop owner who’s managed to make the transition in a very successful manner. His son, Matt, bought the family business from Dave at the beginning of the year, and the process they used could well become a blueprint for other successful transitions all around the globe.

Before we dig into the details of their transition, let’s look at Dusty’s, meet Dave and Matt, and learn how they built a business model that anyone would be proud of.

Dusty’s Transmissions is an extremely successful repair shop in a fairly small neighborhood. Their town, Central Point, has a population of only about 18,000 people, and the adjoining town, Medford, has only about 80,000, for a total market of just under 100,000 people. Not a lot of people to support a transmission and geartrain-only repair shop.

But somehow Dave managed to build a terrific following in his community. “After 37 years, I’m proud to say we’ve built a heck of a reputation. We’re working on generations; we’re starting to see the grandchildren of our original customers bring their cars to us.”

Dave was a transmission tech himself when he opened the doors to Dusty’s. “I got out of high school and took a job washing cars at a nearby car dealership.” From there he worked his way up, changing oil and handling light repairs.

In the mid-70s, Dave took a job at another dealership as a technician. “We were all working flat rate, and I realized that nobody wanted to touch these ‘mysterious’ automatic transmissions. So I decided to specialize in them because that meant I got all the transmission work.”

“I opened Dusty’s in April, 1979. Back then it was a two-bay shop (no lifts!). We now have 8 lifts; we enlarged the shop by 2000 square feet about 20 years ago. And last year we bought the property next door, which doubled our acreage and gave us about another 1200 square feet of shop space.”

The two shops are actually joined together, so they appear to be one building. Dusty’s now covers the entire block.

Dave credits Dusty’s success in part to his love of the business: “We spend about 70% of our waking hours in our businesses, so we might as well look forward to it. You have to stay upbeat: When things get slow, people blame politics or the guy down the street…

“Baloney! There are always people who make it through good times and bad times… there’ll always be ups and downs in the economy… you do your own thing, stay positive, and stay proactive.

“We’re in what I like to call a ‘negative business’; we’re right behind lawyers and dentists… a place where people don’t want to come… they come in because they have to. I think Dusty’s is successful because we’ve learned to turn coming here into a positive experience for our customers.”

It sounds like a familiar refrain… one that’s been shown effective time and time again on these pages.

Matt Duste got his first taste of the transmission business when he was still a small boy. In fact, he’s the one who gave his father the idea for their very unusual sign (more about that later).

After high school Matt joined the Navy and became an air framer, specializing in working on safety equipment. “I was in the highest level of maintenance in the Navy: I-Level. I worked on ejection seats.” An important job; one where “it has to work.”

One thing he learned in the Navy was the importance of processes and procedures; something he’s brought with him into Dusty’s; it’s a skill that’s helped them maintain uniformity in the jobs they do, no matter who’s working on the car.

After the Navy, Matt went to college. “I originally wanted to become an airline pilot; I got my commercial certs,” he says. But his life pushed him toward something a little more practical, so he switched to a business management track.

“When you grow up in a family that owns a small business, you think a little differently,” explains Matt. “You want to be able to ‘do it yourself,’ because that’s what you’ve seen all your life.”

After college, Matt came back to his father’s shop and picked up as a technician. But he brought some wonderful skills and training with him, and Dave was quick to recognize the value of allowing Matt to put those skills to work for the business. He credits Matt with helping keep Dusty’s current and for innovation that’s kept them profitable.

Dusty’s opened on April 1st : April Fool’s Day. Maybe that has something to do with the idea behind their familiar — and a little scary —sign.

Scary? Yeah, well, it kind of looks like a transmission is eating someone. Very Night of the Living Transmissions… certainly not your ordinary repair shop sign.

“When I opened in 1979, there wasn’t a whole lot out here, so I had to do something to draw attention,” explains Dave. One day, Matt, who was just 6 or 7 years old, was at the shop. Dave turned around and saw him climbing into a transmission case, and just like that, a marketing concept was born. According to Matt: “Our motto is ‘we’re into transmissions!'”

“I took an old kitchen chair I had at the house to make the legs,” says Dave, “And I put an old pair of Matt’s pants and shoes on it from when he was a boy.” Since then the transmission-eating-a-small-child sign has become an icon in the Central Point/Medford area. “It was featured in the local Medford newspaper,” Dave says proudly.

Over the years the sign has received repeated cleanup and the pants have been replaced numerous times. “In the wintertime, we have a pair of red pants and boots so it looks like Santa Claus. One time a woman came in: Her kid was crying because he thought Santa crashed and was stuck.” 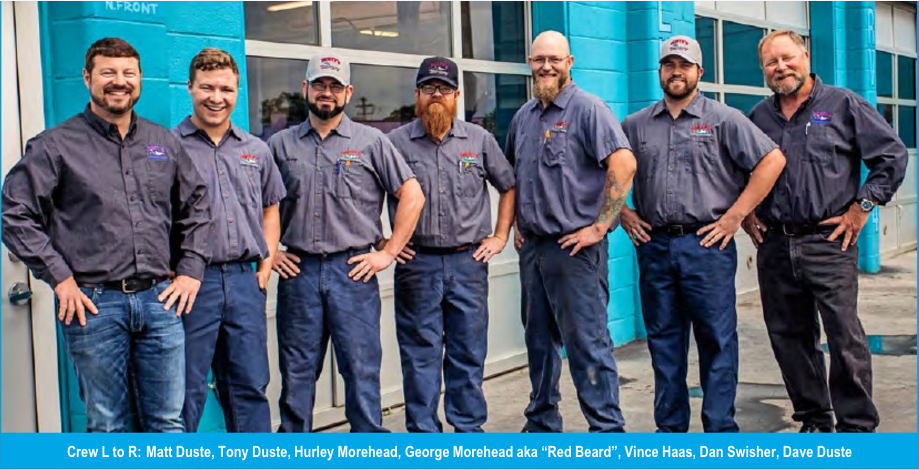 Even though it’s been shown to terrify small children, the sign has become an icon through Dusty’s market. Later, the guy who handles their TV commercials turned the legs around and added a face to create Little Dusty, who’s been featured in their ads ever since. You can see Little Dusty and one of their commercials on their web site at www.DustysTransmissions.com.

In addition to their sign and their TV ads, Dusty’s has done extremely well attracting attention with signs on two of the local transit busses around town. That’s not surprising: Many shops have done well with billboard advertising, and putting them on busses keeps those billboards moving all around town, instead of locked to one specific location.

Their advertising must be effective, because Dusty’s stays very busy, which is all the more impressive when you consider their small market.

“I opened in 1979, and became an ATRA Member shortly after that,” says Dave. “That helped us a lot; I don’t think we’ve ever missed a seminar. The information we’ve received — the books and the seminars — has been fantastic.”

They attend Expo nearly every year and go to the training seminars whenever they come into their area. “Going to Expo helped us a lot,” says Dave. “I took my whole crew last year. But I try to get at least one of us there every year.

“I never come back without learning something, whether it’s from the speakers or just by rubbing elbows with some of the guys who show up there. The entire program has come a long way.

“We had a car come in that absolutely drove us out of our minds. We got a few tips about it when we were at Expo, and that helped us get it squared away when we got back. We’d put in a new computer and took it to the dealer to have it programmed. Turned out their programming equipment wasn’t working right; we put the old computer back in and the transmission worked great.”

As of the first of this year, Dusty’s is under new ownership: Matt has taken over the business. “I’m still here helping out,” says Dave, “but Matt’s the one running things.

“It was always understood that Matt would have first shot at the shop when Dad retired,” says Dave. But that didn’t mean that they’d just shake hands and Dave would hand over the keys: “About a year, year-and-a-half before we did the final deal, we sat down together in a neutral setting, and we each wrote down on a legal pad what we needed.

“We looked at each of the lists and came to an agreement. Then, when it came time, we brought in lawyers to handle the contract. It doesn’t matter how much you love your family; it’s best to handle things properly, so there aren’t any issues later.”

And to avoid any problems with customer perception, Matt took over as the face of the business at least a year before the sale was complete. Customers were used to seeing him in charge long before he actually took the reins.

According to Dave, one of the most important considerations for both of them was that the business remains successful “for both of us. Too many shop owners try to wring as much as they can out of their businesses before the sale.

“I’ve watched business owners bury the people they sell to. They’ll raid the company, take out as much as they can during the last year, don’t replenish anything, and then bury the guy with unrealistic figures.”

According to Dave, that can easily come back to haunt them: “A couple years down the road they hand you back the keys and say, ‘I just can’t make it here.’ Now you’re 70 years old with a business that’s been run into the ground.

“I invested a lot in this business over the last couple years to make sure Matt couldn’t fail. All the big stuff got done: I put a $20,000 roof on the buildingÖ that sort of thing. So, when he took over, barring any catastrophic situations, he should have no problem being successful.”

Now you might think, “Sure, but that’s because his son was buying the business.” True, but Dave is depending on Dusty’s as much as Matt is. He’s holding the mortgage on the business and still owns the building, so he’s collecting a monthly payment plus rent. Those payments will keep Dave living comfortably for the rest of his life… provided Dusty’s remains successful.

It’s terrific to see a shop making its way from one generation to the next. Today, Matt is moving forward, continuing the legacy his father began so long ago. And Matt’s son, Tony, is working in the shop after school, learning the business from his father and grandfather. And who knows? Maybe one day Dusty’s will be owned and operated by a third generation of the Duste family.

Operating a successful transmission repair business is difficult enough; orchestrating a business transition and keeping it successful requires recognizing that the new owner’s success is just as important to you as it is to him.

Thanks in part to Dave’s support, we expect to see Dusty’s Transmissions serve their community for many years to come.

Zach’s Transmission and 4×4 From Technician to Tactician